The "Open Source Science for Bioenergy, Considering Energy for the Future through Synthetic Biology" design thinking workshop was held on the 12th of June, 2018, to consider the use of biotechnology. At this workshop we considered ideas that could be used in a future environment in which energy is retrieved from algae.

Dr. Brenda Parker is a professor specializing in biochemical engineering. She will act as the director in the field of utilizing biotechnology design which is being established next term at London University (UCL.) Working together with architects and designers, she manages a beautiful project called "Algaegarden" seen at the Metis International Garden Festival in Canada (2011-2013), which involves having people assist the growth of algae in order to create green curtains.

Ms. Lena Asai worked as the facilitator, designer, and workshop coordinator. As an exchange student, she plans to enter the same university in September.

The attendants were a diverse group ranging from students to working citizens. The event drew a crowd from various backgrounds, such as researchers involved in regenerative medicine, people who worked in advertising, and antique dealers. 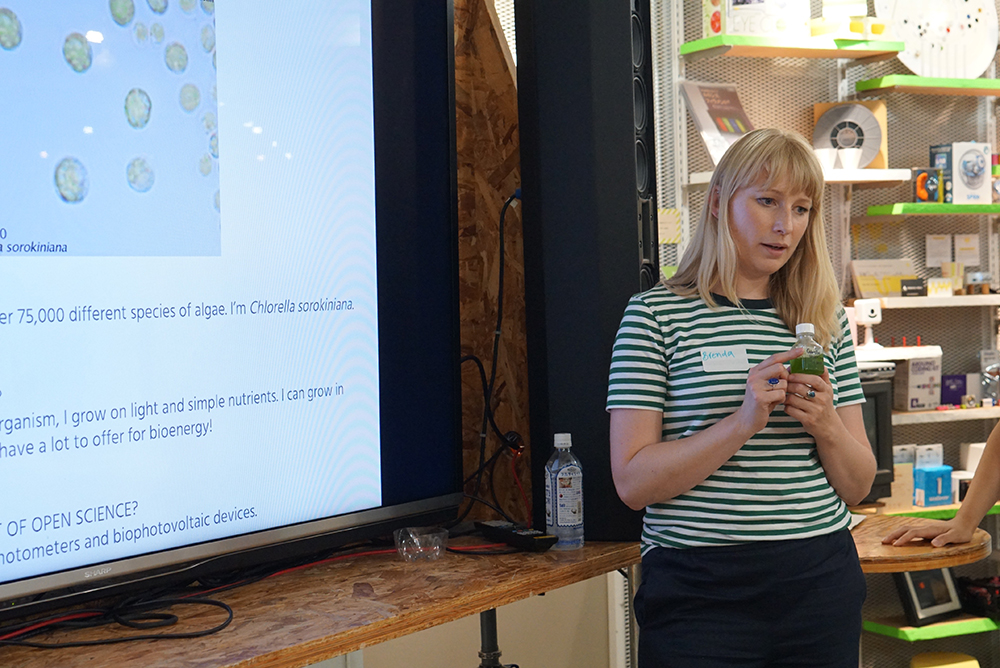 It seems as though there is a tendency in companies and research fields to close down research pertaining to algae growth. Dr. Brenda places great importance upon making the data from algae cultivation experiments open source so that they can be viewed by anybody. She created an online platform for sharing the condition of algae growth called Big Algae Open Experiment, and has created a photobioreactor which anyone can use to cultivate algae. Using algae, a PET bottle, and an air pump to deliver carbon dioxide, it  is designed to allow for easy cultivation with only sunlight, fertilizer and the algae itself. By using this kit to cultivate algae, photograph it, and upload it to the Big Algae Open Experiment website, people can judge and share how far their algae cultivation has progressed. 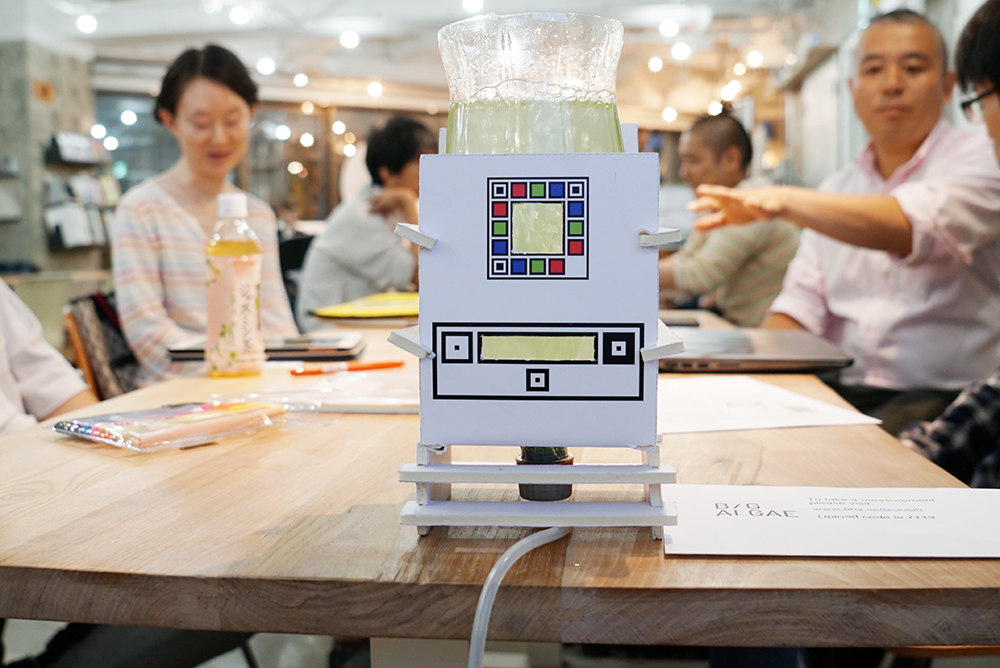 Making a bus move through the energy of algae?

It is now being considered by researchers globally that in the future the algae floating in a fish tank or in a stream could become a fuel source for charging smartphones or moving buses.

This is because the important questions to consider regarding biofuels are: "how easily, quickly, efficiently and simply can they be grown?" In these respects, algae develops quickly, (one cell division every eight hours!) and its conditions for life are very simple making it perfect as a fuel. Water, sunlight, carbon dioxide, and nutrients; it is said that as long as it has these four things, algae can be grown anywhere. To actually retrieve fuel from algae, it has to be taken from the water after growth and its oil and sugar content must be extracted, destroying the surface of the algae. However, the production of algae used as the raw material of fuel is unlikely to be affected by the climate or geographical environment.

What is energy used for in the first place?

Algae is understood to be an excellent raw material for energy production because unlike fossil fuels like oil and coal, it can be continually increased through cultivation. Fossil fuels could only be dug up and consumed, but bioenergy is "cultivated", making it likely that the way energy is made will change.

Next we shall move to the question of "in what settings do we use energy for in the first place?" Humans use energy for a variety of things in everyday life. Firstly, to visualize these settings, we will write down the scenes of everyday life where energy is used onto post-it notes. 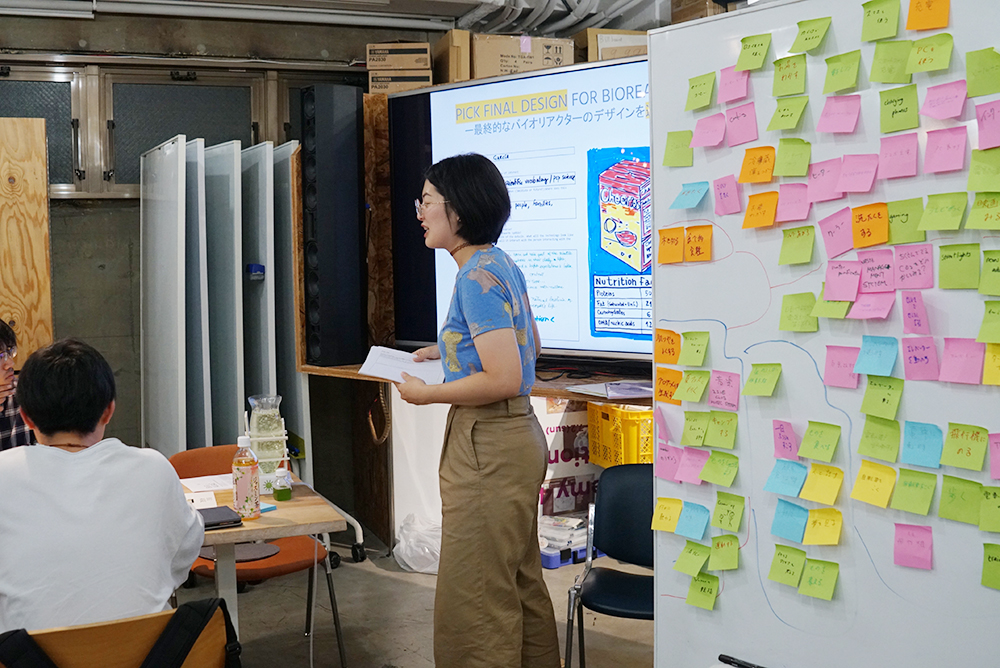 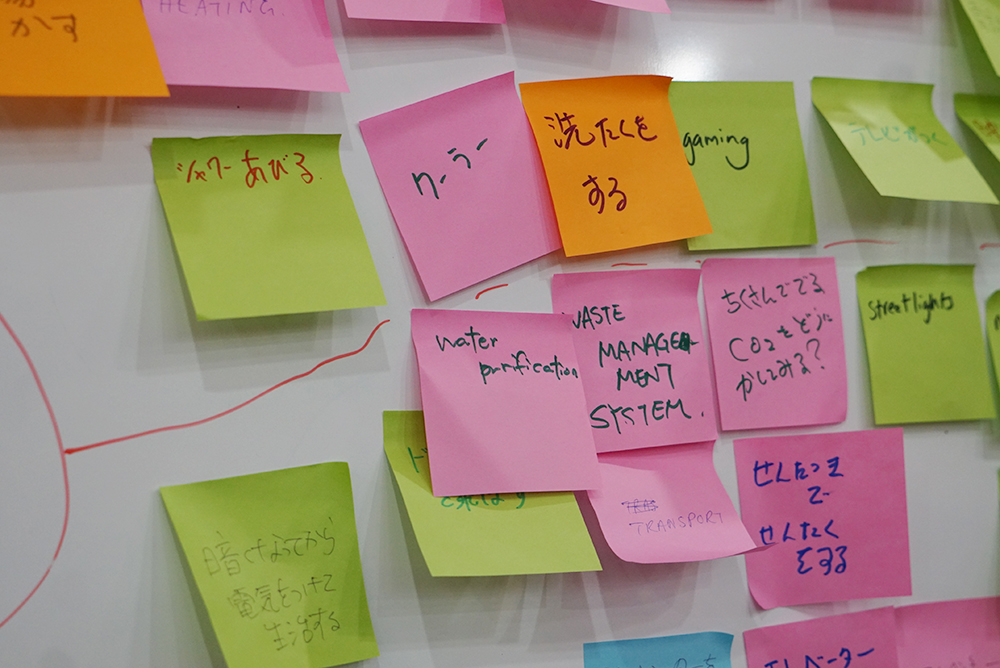 If we classify the "conduct for which humans use energy" that appears in this jumble...

These are roughly the four categories we separated them into.

What is needed to increase the algae made into fuel?

For example, in order to compensate for these fossil fuels with biofuel, to charge two smart phones (10w) would require a surface area of algae the size of a bus. Quite a considerable amount, isn't it? Making a train or airplane operate would require an even larger location. Well then, how can we obtain a location large enough to grow that much algae? Regardless of whether or not they could be actualized, the participants exchanged ideas and drew whatever locations they could think of. 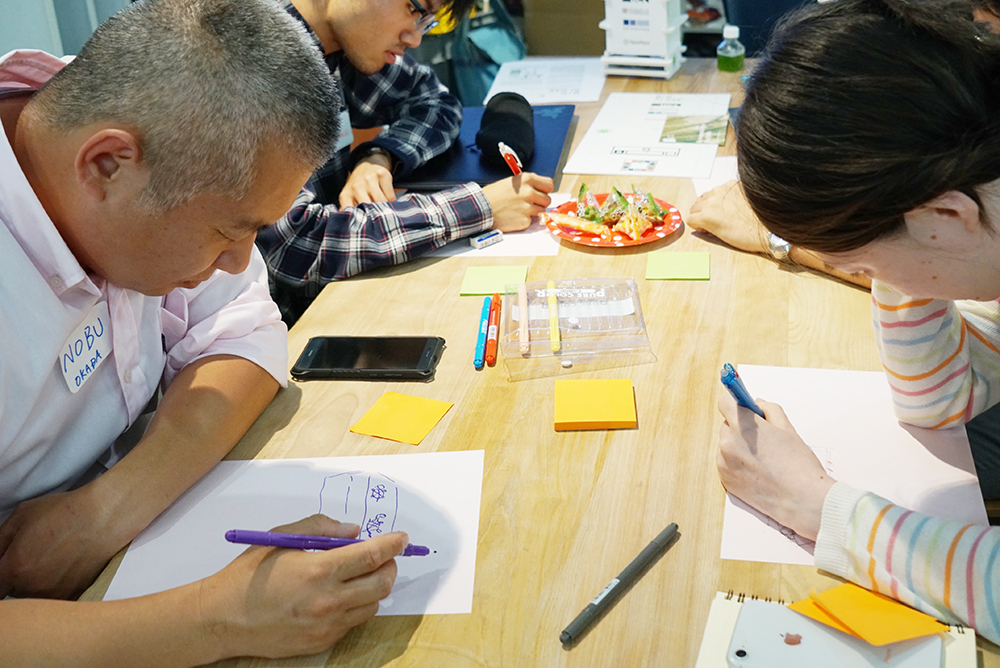 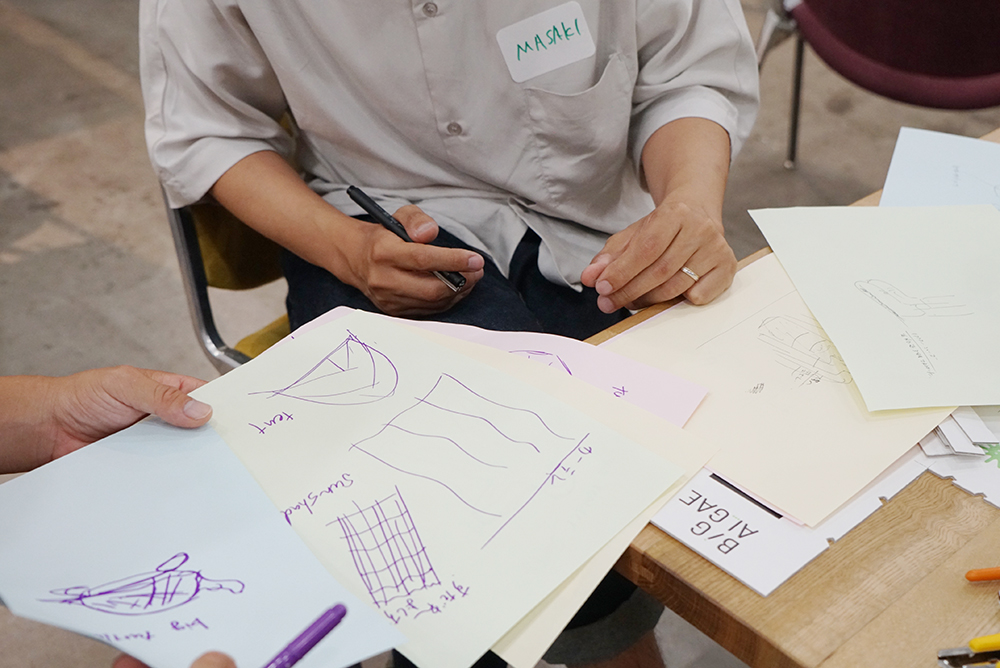 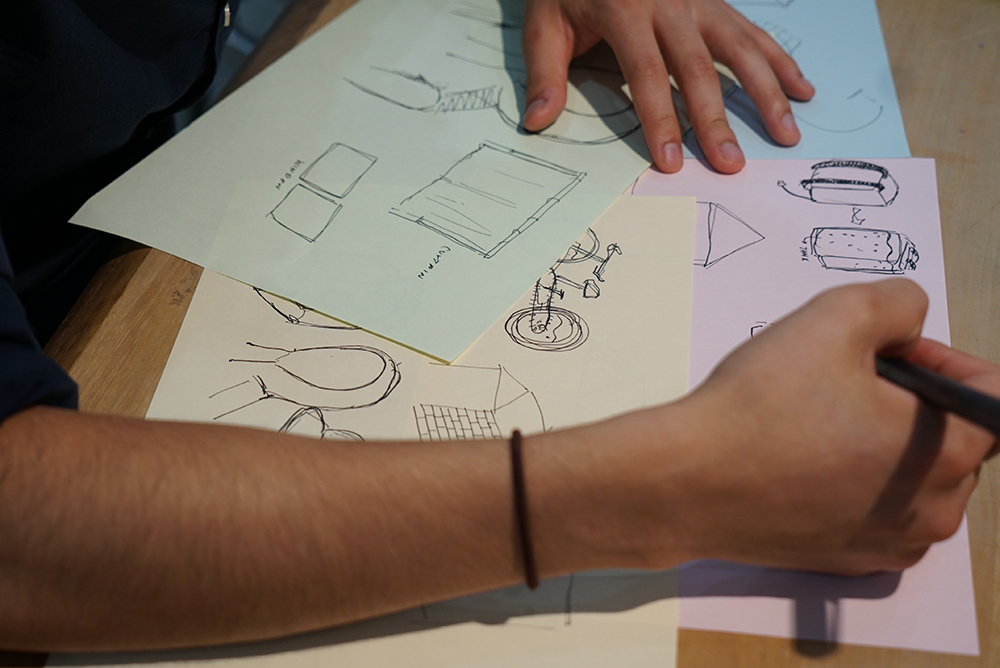 There really were a lot of ideas, but we will introduce a portion of them! A key point of creating these ideas was to "make them as concrete, realistic and as fun as possible!"

.Make the floor of a live show venue into an algae pool, and have those attending produce oxygen by dancing and stirring it up.

.Sticking algae to a movable container.

.Stir up the algae using the pedaling of an exercise bicycle (also good for your diet, killing two birds with one stone!)

.Leave a grand piano full of algae in a public space such as a station, and have the algae be stirred and grown by hitting the keys.

.Fill a pool with algae at a zoo, and have the animals grow the algae by swimming in it and leaving behind their excrement as nutrients.

.Place algae in a diving tank (using the carbon dioxide breathed out by the divers in place of an air pump.)

.Have the algae grow in the sunlight by putting it in your hair so you can charge your phone while you ride your bicycle!

Etc., etc.
We shared the sketches we had drawn and after hearing each others ideas, presented brushed up versions. One of these will be actualized someday (maybe...?) 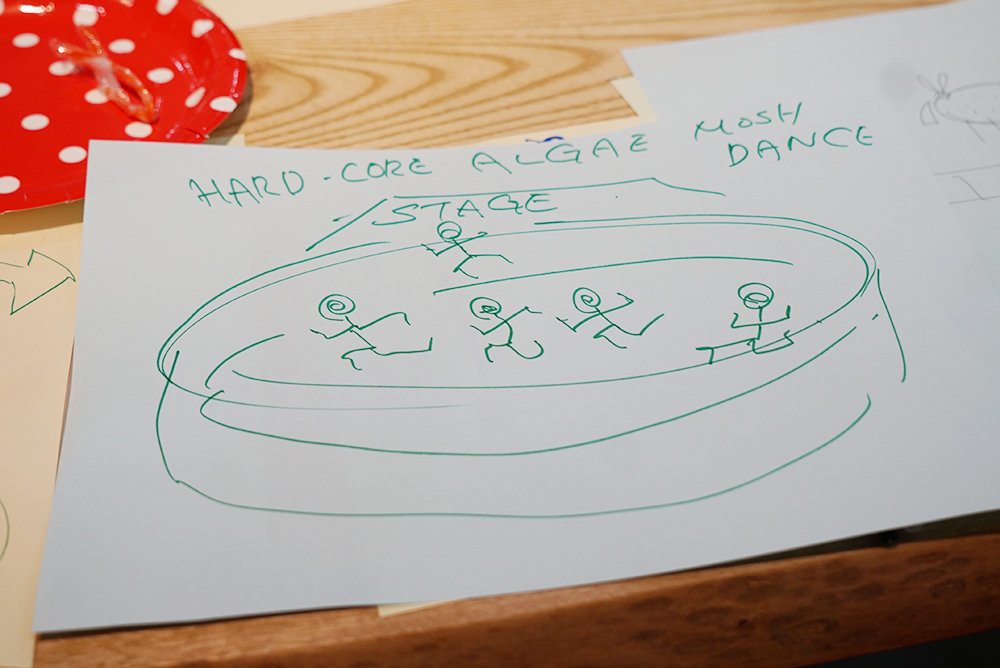 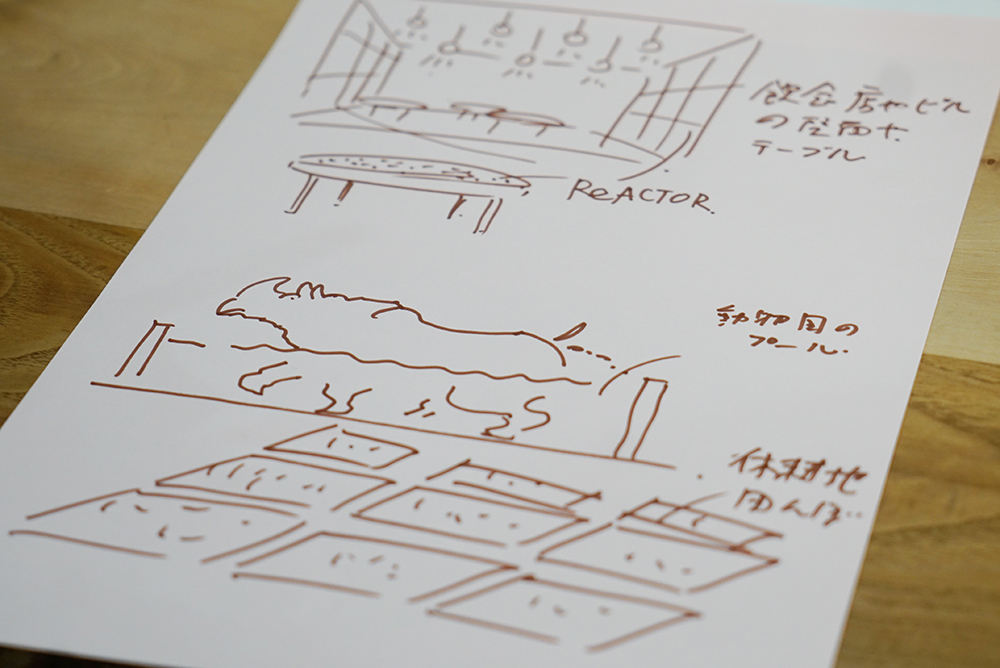 Dr. Brenda also plans to post these ideas on her blog as part of her research.

From the time you wake up until you go to sleep, how much energy do you use in your everyday life? If that energy could be produced more easily, how would your life change? By discussing and sketching we could get a concrete image of a not so distant future, and enjoy a moment of sharing!

As the workshop ended, Dr. Brenda commented: "Biolab became aware of the value of FabSpace through workshops. The proximity of the lab to the workshop venue made it easy to prepare the bioreactor. This kind of environment is not available at UCL. Through this workshop, I have come to realize that the environment in which we conduct research in biotechnology needs to be further diversified than it is at present." In so saying she made clear that "the lab" is a significant existence as a special location which makes work in biotechnology possible.

Thank you to both Brenda and Lena for allowing us to experience an example of argument design for rethinking the energy that is natural to our everyday life! The photobioreactor project is continually archived on Big Algae Open Experiment, so please check it out!